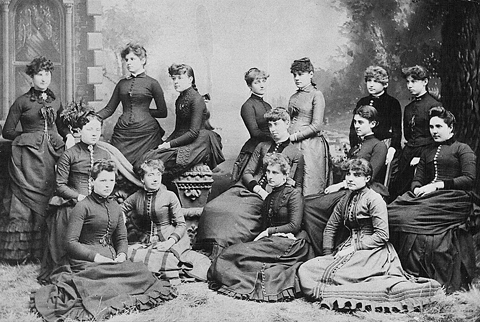 Alpha Chi Omega was founded in 1885 at DePauw University in Greencastle, Indiana, when the dean of the School of Music invited seven of his female students to form a women’s society. The women took this idea a step further and formed a women’s fraternity – the sixth of its kind in the country. Believing they would be the first and last such group in the music school, they chose as their name the first and last letters of the Greek alphabet: Alpha and Omega.

Our Mission
Alpha Chi Omega is a national women’s organization that enriches the lives of members through lifetime of opportunities for friendship, leadership, learning and service.

MOTTO
Together let us seek the heights.

Our Symphony
To see beauty even in the common things of life,
to shed the light of love and friendship round me;
to keep my life in tune with the world that I shall make no discords in the harmony of life;
to strike on the lyre of the universe only the notes of happiness, of joy, of peace;
to appreciate every little service rendered;
to see and appreciate all that is noble in another, be her badge what it may;
and to let my lyre send forth the chords of love, unselfishness, sincerity.
This is to be my symphony.

Celia McClure (1890-1983), a member of Delta chapter at Allegheny College, wrote The Symphony of Alpha Chi Omega. It appeared in the January 1912 issue of The Lyre magazine and was adopted as our official symphony in 1914. Because it reflects our tradition of harmony, it remains popular a century later and is read at many gatherings and events.